What about Tithes, Seeds and Firstfruits?

‘Have you made unusually many trips to the hospital, spending lots of money on doctors, consultations and medications? Thundered the preacher, ‘Or do you find that you have very many trips to the mechanic trying to fix your car? He continued. Or maybe it is the screen of your smartphone. It is because you are not faithfully tithing that is why these misfortunes are coming your way’ He went on. If you don’t give, then even what you have is not protected from moth and rust. So give according to Malachi 3:10 and secure the rest of your income/wealth.

Such messages ring from many pulpits, radio stations and other medium across the continent. People are made to feel that unless they give very specific amounts and in the correct label/category then God might not bless them and they might also be open to all forms of misfortune.

This form of deception emanates from a misunderstanding of the scripture especially the Old Testament where ideas/practices are lifted and applied directly without reference to the cross. Worse still is that this kind of teaching relies on African Traditional Religion and the fears that ATR upheld such as the evil eye, hence the need for spiritual protection over children or property. 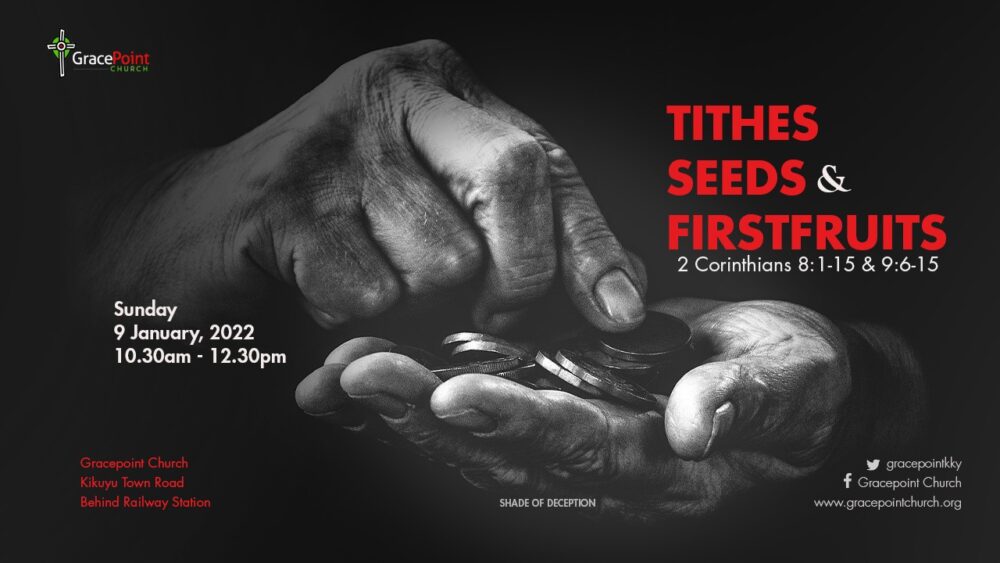 Giving in the Old Testament

In the OT we see a number of ways in which people give. There are specific sacrifices and gifts that form the worship pattern of God’s people in the OT. We shall consider 3 of them;

1. The word Tithe means a tenth of one’s income or produce. We first see it done by Abraham in Genesis 4: 17 -20 and later by Jacob in Genesis 28:22. Later on Moses institutes it as part of the Law in Leviticus 27:30 (Deut 12: 5ff, 14:22 -29 and 26: 1-19). It was expected that all of Israel would give their tithe (part of their produce) and this would be given to the priest (Levites), the homeless (sojourner), the widow and the fatherless. The prophets rebuked Israel when people did not give their tithes.

The first time a free will offering is mentioned in the Bible is in Exodus 35:10–29. God had given instructions on how to build the tabernacle, and Moses relayed what supplies were needed for its construction. The people responded as their hearts stirred them, bringing jewelry, fine yarn, tanned skins, silver, bronze, acacia wood, onyx stones, spices, and oil. These items were all donated “as a freewill offering to the Lord” (Exodus 35:29). Centuries later, the people made similar offerings for David to pass on to Solomon to build the temple (1 Chronicles 29:6–9). In the book of Ezra, the people gave traditional animal offerings (Ezra 3:5) as well as supplies to rebuild the temple after the Babylonian captivity (Ezra 2:68; 7:16; 8:28). The people also made animal offerings in 2 Chronicles 31 when King Hezekiah, one of Judah’s best kings, led the nation in returning to God and reinstituting His ceremonies.

3. First fruits: The concept of first fruits is rooted in a context where people lived as an agricultural community. God called his people to bring the first yield—the first fruits—from their harvest to him as an offering. This was to demonstrate their obedience and reverence for God. It also showed that they trusted God to provide enough crops to feed their family. (Deut 14:22)

“When you come into the land which I give you and reap its harvest, then you shall bring a sheaf of the first fruits of your harvest to the priest.” —Leviticus 23:10.

“Honor the Lord with your wealth, with the firstfruits of all your crops.” —Proverbs 3:9

First fruits had to be brought to the temple priests. No other crops could be harvested until after the first fruits were presented. The Israelites saw first fruits as an investment into their future.so that God would bless all that came afterward.

Conclusion on OT Giving: One Big Lesson and One Big Warning

Giving was an integral part of worship and showed whole-hearted devotion and commitment to the Lord who is the source and indeed the giver of all things. It modelled a love for the Lord with all mind, heart and strength. Application: Worship the Lord with your gifts

OT worship was a shadow of the reality that was to come – Christ, the ultimate gift from God. It later became legalistic and a heavy burden upon the people (Matthew 13). When the purpose is lost and the forms remain then it becomes a meaningless tradition/culture.

Warning: Stay away from religious legalism – OT ideas can shape how we think about giving but it all has to be taken through the lens of the cross.

In the gospels, Jesus talks about money quite often but not about much on giving specifically. An often misquoted verse Luke 6:38 – Give and it shall come to you – is really not about giving but actually about judging others. However, we see giving modelled most poignantly in the sacrificial coming, living and dying of our Lord and saviour Jesus Christ. All Christian giving then is to be done in light of the cross and any giving that does not stem the cross is not Christian.

In 2 Corinthians 8 and 9, we see Paul calling the church in Corinth towards generosity. He commends the churches of Macedonia for their sacrificial giving and shows us a model for giving. Here then are some lessons we can draw about Christian giving;